I thought I'd share everything I've done with my own OBA system to date in case it helps you out. The following is a logical diagram of the OBA system. 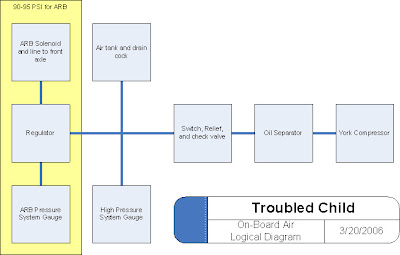 Here's a diagram of the hardware layout. I'll highlight each of the main components in the following sections. 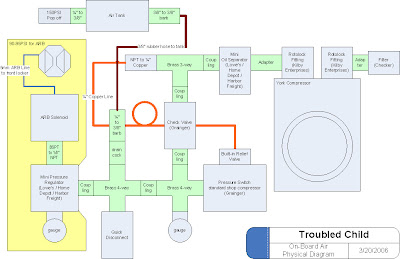 FSJs came with York air conditioning compressors from the 70's through about 1987 or 1988. These are the go-to compressors for OBA primarily due to air flow but also because running them upright means they don't lose (much) oil. After about 1988, Chrysler switched over to a Sanden rotary compressor which are not good for OBA due to the way oiling works. But they're fine for AC.

Normally the earlier York compressors came from the factory installed horizontally with the compressor's head on the left side of the vehicle but you can just as easily install them upright. I ran mine this way while it was still doing AC duties for a few years and it did great. How?

Once installed vertically the compressor will (mostly) retain oil in the crankcase (the York is basically like a little engine but with a head specific to air compression). There's another conversion you can do to force it to retain all the oil, but I haven't done that yet. If/when I do, I'll let you know.

First off, let's talk about the overall system design. In TC's case, I wanted OBA for airing up tires after trail runs and I wanted a source of compressed air to run my ARB front locker (sssh, don't tell ARB because I voided the warranty by not using their $300 electric compressor). I also needed an air tank for both uses. Let's ignore the locker air system for now.

First you need fittings that convert your York to National Pipe Thread (NPT) fittings. You can source these from Kilby Enterprises, pictured below.

If you add a tank, the first thing you want to do is make sure you have a popoff valve on the tank (pictured below). This is a very, very critical safety device that ensures you don't pressurize your tank beyond its limits.
How do you find the tank's pressure limits? Find out the maximum pressure rating when you get the tank first from eBay, or craigslist, or new from 4x4 shops. Then get a popoff valve, rated at or below the tank rated pressure, from the hardware store or an industrial supply / compressor store, or buy online at Kilby, Northern Tool + Equipment

Unless you convert the York it is going to spit out a little bit of oil (less since it is oriented vertically) and you don't want that oil in your tires, do you? To prevent it, get a mini oil separator from your favorite hardware store. Mini because it'll be easier to find a place for.

The other thing you need is a pressure switch (pictured above) that is matched to your system's pressure capacities. Let's say you have a 150psi tank, so you'll probably have a 150psi air safety valve, so you want your compressor to turn off before 150psi (well, at least I would think this would be best; depends on whether the pop-off releases above 150 or right at 150)

You can get these switches from hardware stores, McMaster Carr, Northern Tool, etc., or you can get a smaller, simpler one from Kilby. I got mine from an industrial supply shop. These switches are designed to turn on the compressor at a low pressure setting, and turn off at a high pressure. Ideally, the pressure switch should also incorporate a release / relief / let off valve. What this does is lets off pressure at the compressor when it is turned off. More on this in a moment. The small, simple Kilby switch doesn't provide this feature.

Many of the large clunky industrial type switches allow you to adjust the high pressure shut-off which I find very useful to match your system. The differential (the pressure difference between on and off) is usually fixed but some switches allow you to adjust this too, though I don't think that's so useful. The Kilby switch doesn't appear to be adjustable in any way.

With just the pressure switch, a few brass fittings, some air hose to run to the air tank, and a quick release fitting, you've got the hardware to air up tires. You can also use an air manifold from Kilby (right), Northern Tool, or McMaster Carr for a more compact, clean installation.

As suggested above, you really want to have a way to relieve pressure on the compressor side of things to ensure easy compressor startups and long life. Otherwise when the switch turns off the compressor it has to hold all that pressure it's stuffed into the tank.

Instead, you want a check valve between the pressure valve and air tank and a way to bleed off pressure between the check valve and the compressor. Install a fitting and copper pipe on the compressor side of the check valve, and run the pipe to the relief valve on your pressure switch. When the switch shuts off, it opens the valve to bleed air through the copper pipe. The check valve holds air pressure in the rest of the system. The check valve is available at industrial supply shops, possibly at hardware stores, and you might check Kilby. I had a friend get mine from Grainger but I'll bet McMaster Carr has 'em (and doesn't require commercial accounts).

ARB lockers require lower pressure than you would normally run to air up tires, around 90 psi versus 120-150psi. So what I did was to tack on an entire low pressure subsystem to run the locker. That started with a compact pressure regulator you can get at Harbor Freight, or a chain hardware store. As long as the rest of the system is above 90psi the regulator will hold 90 all day long.

Worth keeping in mind, the ARB solenoid doesn't use 1/8" NPT. It uses 1/8" British Standard Pipe Tapered (BSPT). They're close but why not be exact. So you need a male to male fitting that converts from 1/8" NPT to 1/8" BSPT. If I'm not mistaken I got mine from McMaster Carr but you might want to Google around. So with the conversion you attach your solenoid and then plumb your ARB as per normal. When you power up the system, set your regulator to deliver 90psi. The regulator I got has a little gauge which is of course vital to making sure you get the pressure set right. 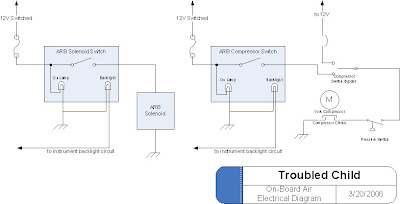 You don't have an OBA system unless you have a way to control it electrically. The York compressors have a clutch that is engaged by sending +12V to the wire leading out from the unit. The pressure switch determines when the compressor should come on, that is, when pressure in the system is below a certain threshold. It also determines when to shut the compressor back off, when the upper threshold is reached.

But you want to have the ability to prevent the compressor from coming on at all, like when you're tooling down the highway. So you need a master switch that controls whether power is sent to the pressure switch in the first place. I used an ARB compressor switch and cover that I bought online. I thought it'd also be kind of nice to be able to have an underhood switch that would bypass the in-cab switch, and used an old DPDT toggle switch I had on hand. With the switch up, it turns the system on. Down defers to the in-cab switch, and center turns the system off (regardless of the in-cab switch).

The other electrical component that needs some wiring is the ARB air solenoid. Sending it +12V will open it, sending (hopefully) 90psi of air down to the differential. I used the ARB switch and cover that came with the ARB for this purpose. This and the other switch also need to be wired in parallel with your dash lights so they will be backlit with the headlights or parking lights on.

Where does the +12V come from? Both ARB and compressor should be powered from a switched source. You won't need to engage your ARB with the motor shut off. (If it stalls the key will still be in the run position and keep the locker engaged). The compressor clutch does no good if it is engaged with the motor off.

That's all for now, I'll finish up this article later.
Posted by Mike Shimniok at 6:00 PM