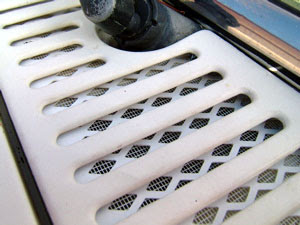 If you've owned an FSJ through any autumn season and parked under a tree, you know that the fresh air box intake, right in front of the engine hood, draws in twigs, leaves and fall debris like some kind of giant tree magnet. 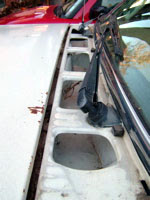 So after 10 years of ownership I finally fixed the problem. I wanted a solution that was cheap, good looking, and easy to install and which would keep out all sorts of leaves, twigs, seeds, and so on. I also had to upgrade the windshield washer squirters but I'll tell you about that later.

I started by removing the vent grill. You lift the engine hood and then remove 7 screws and the windshield washer squirters and lift the grill up back and out. Then I measured the cowl vent and it works out to about 4'x6". 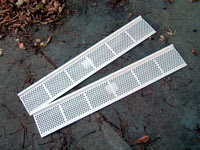 A trip to Lowe's turned up several viable options. Rolls of aluminum screen, (for screen door repair) are about $8/roll with vinyl less but figured the vinyl would tend to rip and sag. In the rain gutter aisle I found covers of aluminum mesh, in a 5-pack, 3'x6" for under $5 but I felt it was too coarse to keep out the materials from our tree. Lastly I found plastic cris-cross guards with screen for about $1.80 each which I think will stand up well so I chose these.

Next step, use the grille as a pattern and mark on the rain gutter cover. Position the cover so that the thick bars of plastic don't show and so that the guard is covering half of the grille so that you can use two guards total.

Then, use a pair of scissors or metal snips or whatever is convenient to cut out your shape and test fit with the grille so that the guard is slightly smaller than the grille area.

Now test fit on the cowl to make sure the guard is not covering the slots nearest the windshield into which the grill tabs fit. You'll need to remove four rubber pieces against which the grille rests. Note where they were positioned. You'll put them back on later once the guard is in place, using some adhesive.

The plan is to affix the guards directly to the intake box, not to the grill. I found that Lowe's is now selling some new self-tapping sheet metal screws with extra wide, extra flat phillips heads (very similar to the oem screws used to hold on the grill). I got a box of these in the #8 size.

If you're clever you will determine before you start drilling in screws, where to place those screws so the grill completely covers them for a more cosmetically appealing result. I didn't think that far ahead.

Now you just drill in screws, perhaps starting at the center and working outward. I used two screws in the middle, at the edges, and one on either side of the washer arms. That's enough to keep it in place and sufficiently tight against the surface of the intake.

Now you just install the grille. This mod has been working great since the fall of 2007 as you can see from the pic below. Wished I'd done this when I first got the Jeep.

The last thing to note is that the windshield washer squirters are obstructed by this material. You can cut out the guards accordingly. Instead, I upgraded to modern hood-mounted squirters.
Posted by Mike Shimniok at 6:00 PM