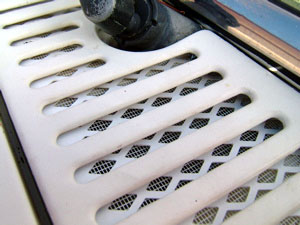 If you've owned an FSJ during autumn, you know that the cowl fresh air intake is a magnet for leaves, twigs, and other debris that end up clogging your fresh air vents and drain holes, leaking water into your FSJ and rusting it from the inside out. Several years ago, I implemented a low cost solution that's easy to install and aesthetically pleasing.

First, remove the vent grill. Lift the engine hood and then remove 7 screws and the windshield washer nozzles and lift out the cowl vent grill. The grill measures about 48" x 6".

A trip to the local home improvement store yielded several viable options. Of those, I selected these plastic gutter screens as one of the lowest cost options. They've held up well for 10 years so far.

Next, use the grille as a pattern and mark on the rain gutter covers. Two are required to cover the entire cowl vent. Position the cover to hide the thick bars of the gutter cover. Measure twice, cut once!

Then cut out the gutter covers with strong, sharp scissors, metal snips, etc.  Test fit and trim so that the guard is slightly smaller than the grille area.

Now test fit on the cowl to make sure the guard is not blocking the cowl grill's tabs that fit into slots nearest the windshield. Trim as needed.

Remove four rubber pieces against which the grille rests. Note where they were positioned. You'll put them back on later once the guard is in place, using some adhesive.
It is easiest to attach the guards directly to the Jeep's body, rather than to the cowl grill. I used #8 self-tapping sheet metal screws with wide, flat phillips heads. Before you start screwing in the screen with these screws, mark locations for the screws where they'll be hidden by the grill.

Next, drill/drive in the screws, starting at the center and working outward. I used two screws in the middle, at the edges, and one on either side of the washer arms. That's enough to keep it in place and sufficiently tight against the surface of the intake.

What about the window washer nozzles? You could cut a hole for the stock nozzles which suck by modern standards. And, a little bit of stuff might get into the cowl. You could install modern hood nozzles, but that requires cutting up your hood. I tried this but be sure to measure carefully. Finally, wiper arm nozzles are an option, but may require cutting a small hole in the cowl screen to route the tubing.

The final step is to reinstall the cowl vent grill. Then, no more fall leaves entering your fresh air vents! Hope you find this helpful. I'm very glad I did this mod and wished I'd done it even sooner.
Posted by Mike Shimniok at 5:00 PM