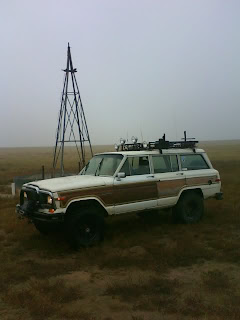 I never did fess up about last year's pronghorn hunt.

We met up on private land quite a ways east of Colorado Springs. The land is expansive and is split up into four or so pieces and rented out. Each piece alone is miles across. Lots of gentle rolling hills, mostly wide open.

The antelope can easily see you coming. And so my first hunt was initially spent trying to identify tiny dots on the horizon through 10x binoculars while the pronghorn's telephoto eyes had no trouble seeing me right back. We'd walk up on them, slowly... get to a certain distance, like 1000 yards, and they'd take off.

Actually the first thing that happened on the hunt was I got lost. Accidentally took a wrong turn and was driving around on someone's property (see pic). Sorry whoever you are. It was really foggy and cool and wet that day (see pic) but it all burned off pretty fast and the rest of the hunting was clear sunny skies.

We scoped out the property pretty well. There's a dirt road going through the middle and we followed that and spotted plenty of pronghorns but we were unable to get close. We tried an ambush approach, waiting at the watering hole at the far end of our area. Not much luck.

Next day we got to watch a coyote chase a small group. We'd been walking after this group for a couple hours. The coyote tore off on the far side of them at full run, and cut across to intercept their path. What an amazing event to witness!

We followed this group awhile longer then reached a ravine area... we decided to try to go down into the ravine and we followed it to its end, came up the hill... and there they were, closer than they'd ever been. They hadn't seen us yet. Toby set up and took a shot but must have missed.

More surprising than that, the group ran but didn't go far, running to our right. Three were still within a few hundred yards and we worked our way towards them, staying below the grass, and we set up.

For whatever reason I didn't have confidence in taking the shot (maybe from missing the deer a year before). Toby took a shot on one... success! And the other two stayed within range for an eternity. But I didn't take the shot. I kept thinking they could come closer, but I didn't realize how close they were. So, they got away. Once again I felt like an idiot at the end of the hunt. A relaxed idiot that had a lot of fun, mind you, but an idiot nonetheless.

Starting hunting only a few years ago, I guess I just don't have the experience built up yet. On the upside, I was able to control my 'buck fever' better and I was able to hold aim a lot better than my first time out.

Things got pretty busy with baby girl later on in the year and so I opted to stay home and skip the deer and elk hunting.

Pronghorn season is starting soon... after a trip to the range with the new scope, rings, extended stock and trigger, hopefully my grouping, and confidence, will be better and I'll finally come home with some truly free-range meat for the freezer!
Posted by Mike Shimniok at 9:09 AM

Email ThisBlogThis!Share to TwitterShare to FacebookShare to Pinterest
Labels: Hunting