One weekend in August, 2007 held several firsts for me and what is adventure if not experiencing new things? Adventure can also be found in places you've been, so long as you're steering your life outside of the daily grind into different territory. Both metaphorically and literally in this case. 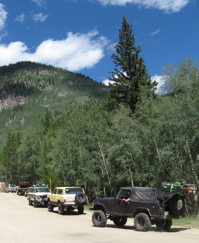 It was a heck of a rough week at work, deadlines approaching and all the pressures mounting, tension, drama, people upset. So it was with great joy and anticipation that I watched Friday come to a close and shifted gears for the trip up to St. Elmo. Scrambling around for awhile that evening I loaded gear, clothes, and most importantly: fishing pole.

I met up with Fred and Randy just east of St. Elmo after a surprisingly uneventful drive down US 285. Troubled Child seemed willing to suspend the typical shenanigans for a couple days.

After rolling Fred's 70's Wagoneer and Randy's 73 Jeepster off their respective trailers, following a repair of the Jeepster's lower radiator hose, and doing the usual tire air down, we headed up the trail. This was my first time driving on a trail all year following the engine swap and failed attempts to take TC to Moab and the North Rim of the Grand Canyon.

Grizzly Lake trail sorts the real trucks from the wannabes right away where you find a gnarly set of rock steps right after a creek crossing. Even if you pick the right line, you better have a lot of clearance or you'll high center. I almost did.

It took each of us a few tries but we were able to find the line. Fred's original line put him far off-camber so that didn't go. The better line was more or less through the middle of the thing, keeping the truck level.

With judicious use of the throttle, wet tires latched onto rock and the trucks clawed up one by one. We all agreed, this obstacle was harder than we remembered from 2004 when we last ran the trail. Randy had minor problems with the radiator hose but sorted that out for the rest of the trip.

After climbing awhile, the next obstacle loomed into view over the engine hood, a series of large rocks, making for a gnarly steep, uneven climb and turn combination. The correct line keeps all four tires in contact. Fortunately we made it up this one without too much trouble.

This time around I kicked in the front locker and it seemed to help as the truck scratched and bucked and struggled its way up the loose surface, peppered with larger rocks to add to the challenge.

This spot was a little harder in places too. Randy's transmission shift linkage came out along this climb but he was underway again after a few minutes.

Another spot with a tree root seemed to have grown harder. The line puts both tires up on two rocks jutting out of the dirt and just a little momentum gets you up and over.

The wrong line either puts your differential smack on a rock, or you shift off into the dirt hole impeding all hope of further forward progress.

The remainder of the trail follows the side of the gulch, finding its way through a dense section of pine, and then out into the open expanses between two mountains. You cross what I'll call a river of 6-12" moss covered granite rocks washing ever so slowly down the mountainside. 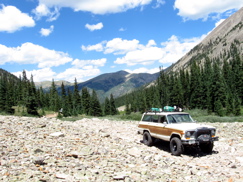 Some more dirt and smaller rocks lie ahead, under the cover of sparse trees, and pretty soon you arrive at Grizzly Lake, set in a mountainous bowl at around 11,200' above sea level.

We arrived without need of straps, winches, jacks, or anything else, and the worst problem we ran into was Randy's linkage situation. That's pretty darn good for a bunch of antique Jeeps. 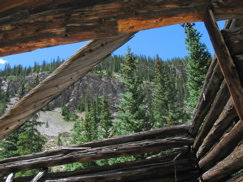 Constant, lighting fast changes swirl around us in our artifical bubble of civilization, the walls of concrete and technology that cradle us but insulate us from the wild, from nature beyond our cities.

We, concerned with our newest fads, gadgets, the fall lineup, the news, a lifestyle that is a cacophony of trivia, a thousand images flashing by in a breath, day in and day out, forget the slow, enduring, deliberate, calming pulse of the natural world. 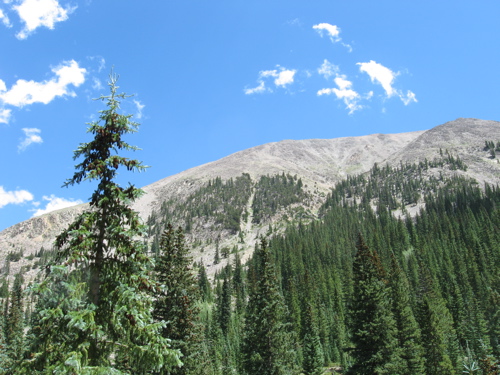 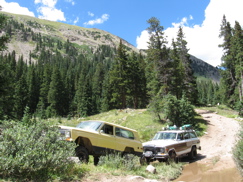 Out there, in the Wild, mountains of rock reach up to the heavens in a pose for the eons, trees sprout up in the flash of centuries, while the rhythmic cycle of life hums a constant note below.

The days come and go, the seasons progress year after year.  How many tiny stream-bound bugs hatch, breed, die every year?  Every day?  The deer have their routines dictated by sun and moon, seasons, weather.

Brilliantly colored trout flash to the surface, patrol their pools.  Freed from the chains of past and future, these animals just exist, their entire beings focused on the moment, their superior senses attuned to Life around them in ways we can never begin to comprehend.

An escape to the back-country, then, is my attempt to break from the trivial clamor of modern life and remind myself there is a longer lived pattern outside the city, a slower running river of time in which I can tarry for a short time.  An outsider, yes, but I still seek to participate in some small way, to pull the plug on the digital life, and plug into the ancient analog if even for a weekend.

After our trail run, we set up camp among the stately pines on perfectly flat, rock free ground on the fringes of the ancient cycle and pattern and it was time to gather the fishing rods and participate, in our odd human way, in Nature.

Fred led me to a series of still beaver ponds along the stream flowing from Grizzly Lake.  This was my first experience fly fishing any kind of still water and only the second time I'd had this pole in my hand in the field. 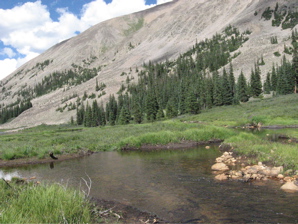 It's important to watch your step in this area.  Dozens of small streams cut through the fauna and soil leaving giant holes that can swallow you up past your knees.

The ground is soaked with water, mud threaning to devour you as you thrash your way through the bushy growth covering the whole area.  Nature and danger are friends.

In the first pond I saw a rise.  Fred threw out his fly and immediately got a hit, a small brook trout.  I was determined to repeat the performance, so I stepped up.  Thus began my education. Either this was the only trout and had left the area or all the others were spooked.

I moved on to the next pool in which several fish hovered waiting for hapless bugs to seek the water's surface, to reproduce, to drink, to rest, I don't know.  I quickly learned how easily trout can be spooked.

I could see the fish underwater, I could see their reaction to my movements, and how they darted away as I came to the edge of the pool... to untangle my fly from shoreline twigs. 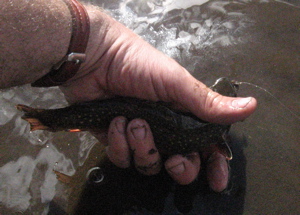 Moving more cautiously I progressed to the next pond, a larger, deeper one, with at least a dozen scaly animals sharing its shelter.  I could see them rising, saw them swiming, patroling, cavorting.

In a few casts, I saw a rise where my fly rested on the water.  I was stunned for an instant, just long enough for the fish to turn and head back down, and I raised my pole on instinct and there was a resistance, a fish, my first fly-caught fish on the end.

I played the determined creature to the bank and got my first look at this marvel of creation, a brilliantly colored animal in deep, rich green, a bright orange belly, with brilliant spots along the side.  This was no hatchery raised trout, but had grown up here, in these mountains. I had touched The Wild... and it was a little slimy and squirmy as it always is when The Wild is in the form of a fish.

(Remember, always wet your hands before handling the fish to avoid removing it's protective slime coating, assuming you intend to release it).  I managed to get the hook out of The Wild so I could let it go back to its home.

I continued to work the pond and gain my education.  The fly would land, the trout would rise, then reject the fly, sometimes.  Other times I'd touch The Wild by snagging a branch.  I managed to whip off two flies from my line. Along the way I learned that the trout would go for a variety of vaguely similar flies, but only when the line and the fly landed just so, with just the right cast.

And yeah, I caught the fly on my back while casting.  Ah, learning.  Another brookie went for it and I played him in as well, another gorgeous fish living its life out in the alpine wonderland.

These fish were pretty small, but ever so fun to bring in, the miracle of catching them for the first time on a bunch of hair and yarn tied to a hook making them seem a little bigger.

Moving on to another pond the next catch was... small.  Actually, it was tiny.  Probably the smallest fish I could imagine catching, only maybe three inches long, good for a bit of a chuckle. 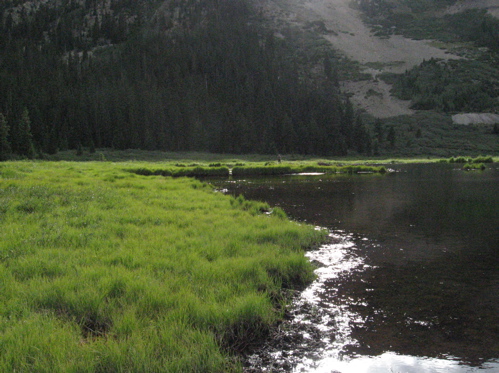 The next, and the largest pool, we finally reached near sunset, the late day rays playing across the subtle waves and swaying grasses, clouds rolling in overhead.

Finally a last fish took a fly during a slight break in the breezes, after lots of practice casting farther than I ever had before, and this time with an ideal presentation of the fly that drew him up to strike.

Finally the sun was low, the clouds thick, and the raindrops growing bigger and more frequent and so began the slow, careful trek back to camp. Fred spotted a giant buck on the way back. Just standing. Watching us.

That night we sat around the fire, the most deeply ancient isolating, comforting human technology, talking and swapping tales as the rains swept in and we huddled under weatherproof garments into the night, and finally turned in, with a long, restful sleep of the sort that can only be found after a full day of communing with alpine denizens, cradled in the pines under the mountains. 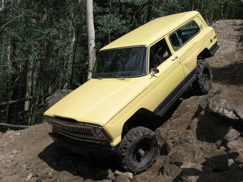 Coming down was even more fun than going up. The rocky turn became a tippy turn, the final descent a different kind of challenge. We all made it ok, although I had several pucker moments.

Once down at the trailhead again, Randy and Fred ran Iron Chest while I headed back home.

US 285 is one of my favorite stretches of highway, and I realized sometimes one forgets to stop and really notice when one has seen something a bunch of times.

I saw it again with fresh eyes and appreciated the wide open country between the giant mountain peaks, the small rustic towns, the beautiful colors, just as I did on that magical day I drove up to Denver in October, 1993, leaving family and friends behind to start a new adventure.

Even seeing the splendor of this part of the Rockies for the first time, I had no idea the incredible sights, the soul-moving experiences I would later have as I took to the back roads. These memories I carry with me and they ease my being until I can make more.
Posted by Mike Shimniok at 11:30 AM