Back in September, 2007, I took a fateful trip to Iron Chest and over Tincup Pass...

Glorious summer is slowly dying away with fall looming on the horizon, poised to steal away fun times on the mountain trails for the year. A long cold wait lies ahead as the leaves drop and the snow flies for months. At least until April.

Maybe we'll head to Moab again this year for an early season opener. Perhaps this year I'll make it to the Grand Canyon for the first time in my life. (I grew up in Tucson, too, go figure). At the end of this summer, my thoughts weave and dart around opportunities taken and missed, about the tentative promise of the future, and about ways to thwart winter with a little outdoor activity. Ice fishing? Snowshoeing?

But neither fall nor winter are quite here yet and there's at least one more trip to be taken, one more camping excursion: Iron Chest trail and Tincup Pass and fishing at Mirror Lake.

We arrived in St. Elmo around 9:45 after a late start thanks to me. I was fiddling around too long in the morning and then had to go all the way back home for something I forgot. Embarrassing (and typical). Oh well, we made up the time ok. No one else was there, which we kind of expected. Paul and his gang were to be up at Mirror Lake, skipping out on the wheeling. Not Scott and I. We pointed our rigs up the trail to Iron Chest, which leads up to an old abandoned mine of the same name. 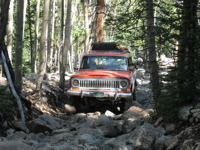 The hardest part of this difficult trail is right at the start. The picture doesn't even begin to do justice to the long field of large, loose boulders that one must bounce and flog one's rig through in a most ungainly dance of metal crunching, diff banging, and all around jostling.

Oh to have lower gearing for more control. Slowly up one rock with all the finesse one can muster then wham, the truck falls off the other side. No chance to use the brakes to slow the decent. This carried on for what seemed like an hour until finally the trail mellowed out and became a relatively easy climb to the top. I sure hope buckboards and mule trains didn't have to endure that. 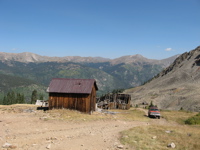 Finally, at the top, we started to catch glimpses of the wooden treasures that awaited. Many of the old Iron Chest Mine buildings were still standing, some had crumbled to piles of timber. Old tram towers fought to stay upright down the hill.

One building was an impromptu museum of found artifacts like soles from shoes, all neatly arranged on an ancient weatherbeaten table. In this building the shelving and bunk beds remained hinting at the feeling of the miners' meager comfort; a feeling surely magnified by the mountain's harsh conditions just outside timber doors. How thankful would you be to live in a lumber shed if the alternative were life on the slope of a moutain peak? 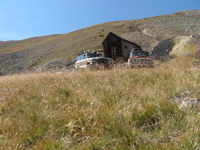 After a lunch at the top consisting of yummy meats and cheese wrapped in tortillas, the four-wheeler's bread, we explored the tailings pile near the mine building for awhile to see if, by any chance, we could find a rock with some gold in it to help subsidize the cost of maintaining our rickety rigs but to no avail. Of course I'm kidding. I'm sure the miners did a fine job of picking anything valuable out of the pile of rock. And there's more valuable stuff to be found here.

Corny as it sounds, the glimpses we get of Colorado's mining past, of old buildings and machinery, of hard life on a hard rocky slope are the real treasure, one that you can take with you and enjoy for a long time in your memories. The wheeling is fun, sure, but so is the discovery and exploration of new, or even familiar places. 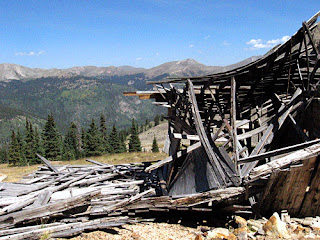 Pretty soon it was time to head back down where we encountered a large group coming up (they had the right of way), so we ended up having to back up the narrow trail about a mile before finding a place to pull over. Eventually we were able to head down and bounce and lurch our way through the rock garden and head up to Mirror Lake via Tincup Pass trail. That's where things took a bit of a sour turn.

We were heading up to the campsite near Mirror lake, past Tincup Pass, to meet a fellow named Paul and a few of his friends. At one point during the climb, I applied the brakes and my foot went completely to the floor! I was going slowly in low range, low gear, so coming to a stop was no problem. We both jumped out to find a puddle of brake fluid by one of the front tires. One of my stainless steel braided lines had come apart. Just as we'd learned in Moab earlier that year, we folded over the broken brake line and pinched it off with a vise grip and strapped it to the frame.

The front brake system held hydraulic pressure like when you fold over a garden hose so at least I had one front brake. I tested and decided it would be ok at slow trail speeds, nothing technical lay ahead. The vehicle could be controlled on the way back down, too. We'd deal with it on the way back from our trip.

After making it up and over Tincup Pass we found our way to the lake. Paul and his friends were fishing so we parked and chatted for awhile. They'd already set up camp and had been having some pretty good luck with Rainbows in the lake. After a bit Scott and I headed to the campsite, set up, and joined some of the lakeside party.

As mentioned everyone was having great luck at the lake. Well, except yours truly. At least there was plenty of opportunity to practice my fly casting. Switching back and forth between spinning rod and fly rod didn't really improve my luck.

I lost a lure, lost a fly, got tangled up, hit myself in the back of the head with fly line a few times. As evening came along I was able to coax a little interest from the fish in the dry flies but I think the trout were hitting emerging insects just below the surface, not bugs on the surface because none of them actually took the flies.

It was getting late and a few people were drifting off to camp to set up for dinner. Still no fish. Skunked? Argh. Couldn't let that happen. Surely there was one fish out there. Others had been using worms while I staunchly insisted on trying power bait, salmon eggs, and artificial lures to no avail so I broke down and tried some nightcrawlers.

Evening was starting to fall, dusk approaching. Still no fish, but a few nibbles but no hearty takes. Finally it was time for the big guns. Figuring on luring in a bigger fish, I took a whole worm and rigged it across two hooks... cast the rig out on a bobber where something had been nibbling and waited. Then, a hit, and a fish was on! After playing it a little bit, the fish turned out to be a real nice 11" rainbow. I packed up and headed for camp where dinner was underway.

Fresh caught trout is far tastier than I imagined. With some cornbread coating, oil, salt, pepper, and some creole seasoning, the fish turned out great. Paul's mountain stew was super as were the various sides. We all ate really well.

A windy and rather cold evening awaited our party. It must've gotten down into the 40's or less, signs of summer coming to a close.

The next morning left frost on the tent. After a very hearty and delicious breakfast it was time for us to head out. The plan was to stop in Buena Vista at the parts store for a new brake hose.

Aside from a minor glitch with Scott's transfer case shifter cable, it was an uneventful drive into town.

Unfortunately no brake hoses were to be found at the only parts store in the vicinity. After a slow trip to Fairplay, nothing was open, so we had to leave TC behind.

The nice folks at the motel let us park the truck, and we moved all the important gear from TC to Scott's rig and made our way back to Denver. Fortunately we were able to head back down on the following Monday, fix the brake line, and get TC back home.

That's the only time I've every left my rig behind. Come to think of it the truck was pretty reliable after that point. Maybe it finally learned a lesson.
Posted by Mike Shimniok at 12:00 PM