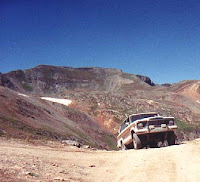 Way back in 1999 I discovered a jewel among the Rockies, a getaway offering some of the most beautiful alpine views in all of Colorado.

The mountains are flecked with the history of adventurous miners. Old buildings in the towns of Ouray and Silverton silently stand watching the decades pass, sparking the imagination, painting a ghostly panorama of life around the turn of the last century. Out on the old trails, feelings of awe can be found around most every turn.

How do you explain to someone who voluntarily incarcerates themselves among streets and concrete what it is they're missing? Pictures are pretty but a 4 inch by 6 inch flat piece of paper doesn't convey the size and space standing among eons old mountains, or the brilliant splashes of color in crumbling rock and delicate flowers clinging to them. 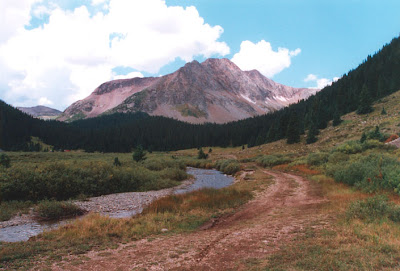 I've been to the San Juan Mountains a half dozen times in ten years and the adventure never gets old.


I wrote that in 2008 preparing for a trip that never happened because of a loss we experienced that year. The last time we were in Ouray was 2005. I haven't been to Ouray since, but our wonderful little girl, born in 2009, has taken a shine to the "Big Jeep" over the last few years.

At long last, I'm making serious preparations to take her on some four wheeling and camping trips, something I've tried to do for the last three years. Maybe, just maybe this is the year, 2013, I'll get to share the wonder of the San Juans with her.
Time passes quickly. Don't watch as it passes you by.

Find what's most important and grab onto it as if you won't live forever...
Posted by Mike Shimniok at 12:00 AM