Thursday morning came early and with a bit of misery following the all-night drive after work to Montrose.

The Black Canyon Motel was a pretty decent place to crash for the night although I could've slept on a rock, no problem.

On request from Will E I headed to Autozone to pick up a part for his Sport Trac, then headed to the Ouray KOA, with a McD's breakfast in hand, ready for the adventure...


The group decided to run Alta Lakes. I'd never done that one. It's located around the corner from Ouray.

But, on the way, you have to be sure to struggle like nuts going up Dallas Divide, push the temps, and have at least one of your members overheat.

Cherokee Jim's beautiful red Cherk was the victim this time, and it stalled just as a shoulder appeared. A few stayed to help, the rest of us found more room to pull over up and around the bend. 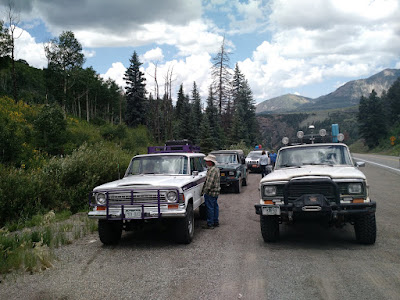 Waiting ensued. This is a common FSJ trail run scenario. If we were stuck in our rigs the whole time we wouldn't get to talk, right? 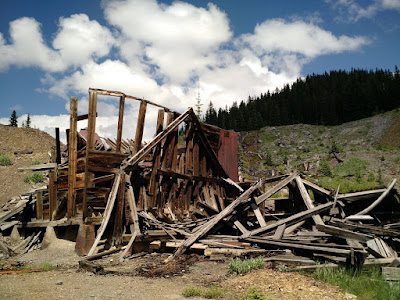 We got going again and made it to and up the trail, which features lots of scenery, old mine buildings, and not much technical difficulty. 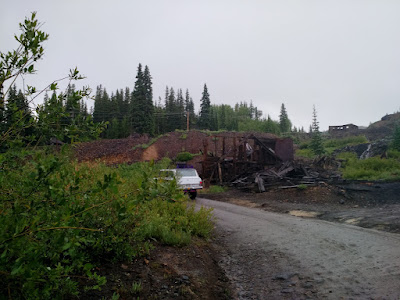 At the top are the lakes, inset in rich green forest. The smoothly rippled surface interrupted by splashing trout and making me wished I had two things. My fishing rod, and a license. 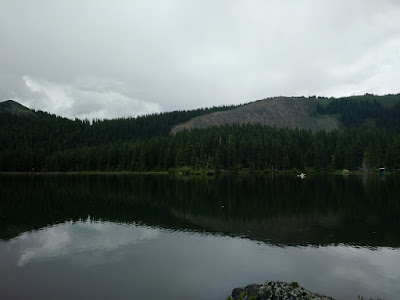 Scott and his son had both and did their best with the fish, but were unable to compete with various insects landing on the water, including an aggravating number of mosquitoes. 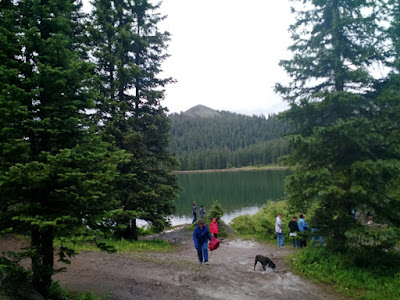 The group milled about, chatting, enjoying, and then buckets of rain ensued, much like most other days this summer, explaining the unusual greenery and wildflowers that greeted us on every trail.

Heading back down was equally uneventful and fortunately Dallas Divide seemed tamer on the way back for all of us.

Buen Tiempo is still in business down there and still as awesome as always. One of my favorite Mexican restaurants in Colorado, which is saying something coming from a Tucson boy.

We circled around the campfire that night, telling Full Size Jeep tales, and I caught up with old friends, and got to know new ones.

Sleep came real fast. And with a smile.
Posted by Mike Shimniok at 12:00 PM