Last we left off, I was scrambling to get the rear brakes done in time for the Mosquito Pass run. The parts arrived quickly and I did the brake job with time to spare.

One adjusts the rear drums by driving in reverse and pressing the brake, which activaties the automatic adjusters. I did this a few times and then...

I did this a few times and was almost done, then ... no reverse! Nothing. Uh oh.

With a sinking feeling I drove home. Violet and I would be passengers on Mosquito Pass.

Transmissions are a final frontier for me: dark, arcane magical boxes of wonder, their inner workings a mystery wrapped in an enigma, enshrouded in a big WTF?! Well, here's what I did next...

I always start with diagnosis, but to diagnose you have to understand how things work. So after some web research on various Dodge, IH and Jeep forums that pointed to a broken reverse band or reverse servo, I set about (shudder) learning, at a basic level, how slushboxes work. Well enough to troubleshoot at least. And, actually, it wasn't that hard.

The 3-speed 727 uses clutches, bands, drums and planetary geartrains to transmit power from the engine to the transmission output with various gear ratios. It has a front clutch, and a rear clutch, a reverse/low band and an overrunning clutch which operate on the rear drum, and a front (kickdown) band and that operate on the front drum.

Second gear engages the rear clutch and front band while Third gear (aka high or drive) engages the front and rear clutches. Both worked fine and were unrelated to reverse gear.

Reverse gear engages the low/reverse band, and the front clutch. So, clearly one of those two functions weren't working.

Manual low engages the reverse/low band and rear clutch. The rear clutch remains engaged even when you let off the gas, providing engine braking.

Breakaway Low occurs when starting from a stop with the selector in Drive. In this gear, the rear clutch is engaged and, only with power applied, the overrunning clutch holds the low/reverse drum stationary. Without power, the transmission more or less freewheels. 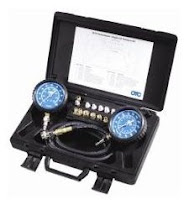 Armed with this knowledge, I now had a simple diagnostic test requiring no disassembling. (In fact, many problems can and should be diagnosed before disassembling anything).

If the reverse band or servo are broken there will be no engine braking in manual low. Furthermore, the vehicle will not downshift manually into low from 2nd; it'll freewheel. And that's exactly how TC behaved.

I now knew the problem was either that the reverse servo was not engaging or that the band was broken.

To eliminate a broken reverse servo piston, one tests the pressure on that servo when the transmission is in reverse. If it's 200psi, the piston is ok. If not, either the piston is broken (a common failure mode, according to the interwebs) or something else is wrong.

I bought a set of gauges (OTC) and found the pressure was essentially zero. It wasn't the band. I figured that a broken piston was the most likely explanation and opted out of further tests.

The surest confirmation of my broken servo piston hypothesis was to drop the pan and find a chunk of servo piston at the bottom. And, that is exactly what I found:

I didn't get the transmission fixed in time for Mosquito Pass, or before the first snow or even before winter was almost over. Life was repeatedly kicking me in the tenders, so the Jeep took a back burner. For six months.

The problem was, I had promised to take Violet on a big Moab trip at the end of March, just daddy and daughter, and the departure date was coming up fast!

Would I fix the Jeep in time? Or would we be relegated to passenger status once again? Stay tuned...
Posted by Mike Shimniok at 5:30 PM